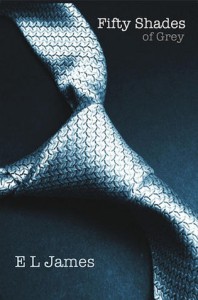 Finally finishing this book was a joy I was hoping for, quite soon in the book...
But, let me start from the beginning.

Reading the first few chapters I honestly thought Christian Grey was a vampire. The similarities with Twilight were so profound and the way the heroine described the hero was almost the same with how Bella saw Edward (and I realized that without even knowing that the plot was originally written as a fanfiction to this specific novel). I admit I was prepared to be disappointed if he proved to be a vampire. Not very original, considering the things I mentioned earler.

But, I also have to admit that, for me, all the similarities with Twilight ended when the big revelation came. Furthermore, I was even more disappointed with the way things turned out to be, even if they were more truthful.

So, about my review? Here it is.
I honestly can't stand Ana. Her self-esteem is so low, and everyone around her doesn't help her with that matter, too. The boys that like her don't really consider her beautiful. She borrows her roommate's dresses all the time, too, like she doesn't have her own, and only when her mother goes with her she can buy her own.
Meanwhile, at the beginning it was cute of her talking about her inner goddess, but soon it got old. Too old. She mentioned her all the time, especially at intense moments where the reader couldn't care less about something like this.
She keeps talking about Christian's issues, not considering the ones she has.

And now, about Christian's issues...
The psychologist in me was furious with the hero. I even made a case study about him. It was unbielevable. Making someone having so many psychological issues. Gah, and to think of the way he treated the heroine. And she stayed.

Ana was utterly stupid for trying to force him into a relationship right from the beginning. I don't know how the rest of the series will go (because honestly I'm not considering reading the next installments) but she should have gone away from him right from the beginning. It was her first relationship, she wanted something romantic, and still she wanted him to be something he was not. Mutual, intense attraction or not, her behavior proved her to be simply dilusional and unfair to him. All along I hated her attitude. She knew exactly what to expect from Christian, what he was capable of, what his limits were, and she still tried to push more and more. And, what's even more infuriating is that he still wanted her.

For me, the end of the first book is the appropriate end of this love story, and I'm not even going to try and finish the rest of the series. I don't care if she hurts, but if she can't handle the situation it's purely unfair for the other end of this relationship to make it so hard.

As of the way this book was written? Before I found out that the story was originally posted on Wattpad, I had some suspicions. The way the plot was unfolding was rather amateur-like. At least at the beginning. I felt like reading the story in the website mentioned above.

Frankly, I've noticed that the ratings of this book were either about loving it or about hating it. I'm on the second category. And it's no wonder. I was waiting for the book to end with such an anxiety I rarely feel.
Tweet