Pirateship Down: Stories from the World of the Sentinels of New Orleans 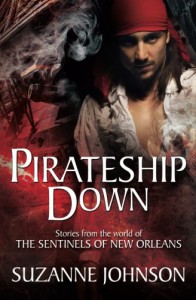 Originally posted on Book-o-Craze, on a tour hosted by Bewitching Book Tours.

It was a fun and greatly entertaining read, very well-built by the author, so that it wouldn't be hard for someone who hasn't read any books in these series -someone like me -, to follow up.

In more detail, the first short story "Talk Like a Pirate", mainly features 19-th century French Pirate Jean Lafitte and New Orleans Wizard Sentinel Gerry St. Simon. We get a first taste of the (in)famous pirate, and are able to see his interaction with the wizard before the series started.

Next, we get "a little something extra", with a brief, but to the point, explanation of the Sentinels Multiverse, and its inhabitants! This is where you can find out more about the wizards, the fae, the merfolk, and even the elves!

"Alex, The Pig" is a short story that features three of the protagonists of the Sentinels of New Orleans series, DJ, Alex and Rene. It is a short, fun read, about a small adventure that includes a certain cursed leprechaun!

The next story, "Cat Mon Dieu" features a rather brief adventure of the pirate Jean Lafitte, in the Rouses Supermarket, and the chaos he just barely avoided causing!

A few trivia is then offered about said pirate, for us to get a glimpse in his life before he was killed and became a historical undead livind in the Beyond!

More information about Alex can be found on "Rivalry", a short featuring himself and his cousin when they were still teenagers, and around the time he had just started getting to know his shapeshifts. For everyone that has read the series, this short would actually prove to be very enlightening as to why he is who he is, and about the way he behaves!

Both "Swamp Rats" and "Danger: Curves Ahead" featured DJ and Alex, giving us a glimpse of their relationship and how they interact with each other!

Another extra follows, regarding the Sentinels Bibliography, before another story occurring between Alex and his cousin Jacob is provided!

Last but not least, the novella with the same name as this collection, "Pirateship Down" is a quite an interesting read featuring DJ, Rene and their adventures trying to get Jean Lafitte out of the mess he has created for himself.

All the stories, and especially the novella, are quick, witty and with lots and lots of humor! I actually caught myself not only chuckling, but also laughing out loud with DJ's narration. I loved the author's writing style, and the whole collection made me want to start the series as soon as I get them on my hands!

All in all, 5 stars to a book that made me laugh more than any has succeeded in doing in a long long time!
Tweet