Fooling Around With Cinderella 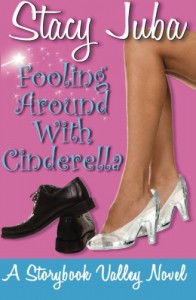 
This might not have been an exact retelling of the famous story of Cinderella, but that exactly was its beauty!

When Jaine sign ups for an interview in the amusement park of Storybook Valley for a marketing job position she never expects the events that will soon start unfolding.
Her extremely handsome new boss Dylan, offers her a temporary position as the central princess star of their park, Cinderella, until fall, when she can start fully working as the marketing coordinator. In need of a job, Jaine reluctantly accepts his offer.

From them on, things just kept getting more exciting by the minute!

There is a rather big amount of things I loved about this book. The main characters, the slow and gradual building of Jaine and Dylan's relationship, which seemed so real and natural, the similarities with the popular fairy tale. Everything was amazing!

Jaine is a young, independent woman, that has been looking for a job, ever since she was left unemployed. When she was at a young age she lost her mother, and now that her father remarried another woman and left to leave with her, Jaine is left with only her twin sisters and her young niece in her life! Her sisters might not be the evil twins of the original fairy tale, but they were a little selfish and self-centered, while also being closer with each other and not with Jaine.

Dylan wasn't the son his parents originally wanted to take over the management of the park. But, the course of events forced him to take over. Having previously been a "bad boy" he didn't wanted to prove himself worthy his parents' disappointment.

This is why the attraction between him and Jaine, that was imminent right from the beginning, complicated things...

This was an awesome and very authentic story, with a magical fairy tale twist, and I enjoyed every minute of it!

All in all, 5 stars for an original retelling of one of my favorite stories!
Tweet