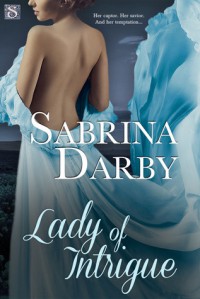 This book really lived up to its title, with a significant amount of intrigues and hidden conspiracies being involved! But it was so much more, at the same time! It was a tribute to love between lovers, as well as family members!

It all started when Lady Jane Langley was involved in a -not really- accident, where she witnessed a stranger killing one of her co-passengers. The course of prior events, that are thoroughly explained later in the book, forced that stranger, named Gerard Badeau to hesitate before killing the witness. Instead, he decided to take her with him, unwilling to let her live and betray his secret and identity, but also unable to find the courage to finish her off, too.

From there on, an adventure begins for the Jane and Gerard, where the time they spend together force them to make an alliance, based at first on the severe injuries the lady has suffered and his tending to them, and later to a much deeper connection that starts to form between them slowly but on a steady pace.

I loved the way the author described this delicate blossoming of love between the heroes, while they both struggled to find themselves and realize their feelings for each other.
The whole procedure seemed very similar to what happens in real life, too, even if the people involved are not as complicated and complex as a lady and an assassin loving one other!

The book proceeded in a steady pace with no rushed feelings coming forward. Everything seemed so natural, when at first it was the close proximity and the fact that they were alone seemingly outside of the real world that brought them together, the long conversations they had with each other, the physical attraction and the need to consummate their strong feelings, and, least but not last, the actual love settling. A love that meant the abandonment of any egotistical feelings about their previous lifestyles.

There was also a strong reference to the meaning of family, referring not only to the marriage, but also to the relationship with the heroes' parents, as well as their siblings and their closed ones, something I also extremely enjoyed.

I could go on and on about the love between Jane and Gerard, and they way I perceived the whole procedure taking place, but instead, I will decide to not spoil the fun of the discovery for the rest of the readers. I will just emphasize the fact that I loved the way everything was flowing, the way the author described them, and the fact that the excitement started right from the first chapter!

All in all, 5 stars to an amazing experience of love of all kinds!
Tweet